A Must Watch Movie of Audie Murphy starred Column South 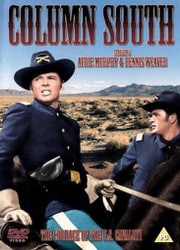 Western movies, especially those in the Technicolor format, teleport us to a magical world that embodies the spirit, the struggle, and the demise of the new frontier. This is why people enjoy them more than gangster or fantasy movies genres (although many have differing tastes). Jam-packed with action sequences such as men riding around on horseback robbing banks, chasing stagecoaches, or battling with Native Americans gave us history to experience, heroes to admire, and stories to treasure. While there are a plethora of western movies, one of the forgotten classic movies is – “Column South”

The premise of ” Column South movie DVD” is that the ‘brink of the Civil War’ movie is set in 1861 and tells the story of Lt. Jed Styres (Audie Murphy), a Union officer, who tries to prove the innocence of local Navajo Indians behind the murder of a prospector while discovering the ploy of Confederate sympathizers to benefit from agitating the Navajos to declaring war.

The Civil War is looming at New Mexico’s Fort Union as of January 1861, and the troop’s loyalty is mixed. The new commander from Mississippi, Captain Lee Whitlock (Robert Sterling), is joined by his sister Marcy (Joan Evans). He’s a glory-seeking captain who almost starts a war with the friendly Navajos because he thinks they scalped a prospector and took his riches. Under Whitlock’s command, Lt. Sayre (Audie Murphy), a Union officer, realizes that the true perpetrator was another fellow prospector Tom Kehler when investigating the crime. By a timely intervention by Jed, Whitlock was convinced to put off the battle with Navajos, averting a blood bath. Marcy shares her brother’s hate of all Indians and gets off to a rough start with Lt. Jed but has a change of heart from this event.

The plot twist comes in the form of Brig. General B.N. Stone (Ray Collins), who is ambitious. Brigadier General Stone is the Union’s commanding general for the territory of New Mexico, and he is currently based in Santa Fe. He plots to assure the Rebs win the west, and he intends to steal gold to help them win the war. He has hidden intentions to deploy his Union forces to Texas and dupe the Navajos into attacking a starved Fort Union. He convinces Whitlock to default and abandons the fort with few soldiers guarding it. Jed and others arrive back at the Fort just as it was about to be captured by the Navajos. The rest of the film is about how Audie foils the scheme, wins Marcy’s love, proves the Navajos of their innocence, and Whitlock rescues the day for the Union.

Why is Column South a Forgotten Classic?

1953 was a host to really fine movies in the western genres and the movie was severely overshadowed. Moreover, it followed a tried and tested but completely predicted formula of an honest antagonist, a confused protagonist, a hatred-turned-into-love between the lead pairs, a sneaky villain, sprinkled with a few Navajo warriors in a wooden set of the fort.

However, Audie Murphy plays a convincing role as Lt. Jed Sayre and the look of retro vintage movies is attractive and appropriate. The location Victorville and Apple Valley, Cal. were very nice choices and looked realistic. Many reviewers voiced their concerns that under a more dynamic director the film would have fared better. It is still an entertaining western with some nice location shots, some nice action, and some nice drama.

Column South is neither boring nor disagreeable and Audie Murphy did his part of carrying the movie on his shoulders. Column South is one of the hidden Audie Murphy movies for sale and has an interesting premise but ends up being a routine western movie that is still a fun movie to watch on a lazy Sunday afternoon.